Mindset reset: Be easy on yourself

I love a plan. I LOVE goals and to do lists. I know in my heart of hearts that I will not achieve all of them. At least, I know this intellectually. But emotionally, I am committed to getting things done. So, in 2018, I was determined to make 6 blood donations, and I aggressively pursued my goal. I posted about blood donation on social media, talked it up to people in person, made it my business to make people aware of the importance of giving blood (if and when you can).

Or, I thought I failed.

As the year came to a close, it was clear I was not going to make six blood donations. I spent the year timing each donation and knew I had several weeks at the end of the year for the 6th one, but life got in the way. I was up to my ears at work and could not carve out time before the last ten days of December. I found a blood drive right after Christmas that ended up getting cancelled. And when I went to another three days before New Year’s, I was turned away because they were suspicious of my sniffles.

I was annoyed. “I’m always a little congested in the winter,” I told them. The phlebotomist did not seem sympathetic.

“We’re giving your blood to cancer patients and little babies. You might be able to fight a virus but they can’t.”

She was right. The whole point was to help people–not to put them in harm’s way or compromise their already precarious health so I could congratulate myself.

“See if it turns into anything,” the Red Cross phlebotomist told me.

That was four days before the end of the year. No time to find another drive. So that was that. I failed.

It’s a terrible attitude to have. To look back and say I failed. Because I didn’t exactly fail. So this year, I’m flipping my own script.

I felt disappointed that I didn’t make a sixth donation but I ALREADY MADE FIVE BLOOD DONATIONS IN ONE YEAR! (That’s what my husband told me–he is wise. I should listen to him more often). I was being selfish and self-centered. At that point, meeting the goal didn’t seem to be about helping people. It was about checking a box and taking a victory lap.

I should already be taking a victory lap. All year I posted photos after I donated blood and heard from friends who decided to donate blood again or for the first time. At year’s end, I loosely calculated the connections made about blood donations over the year. I made 5 donations and at least 9 people told me they were encouraged to donate blood. If each blood donation helps up to three people, that’s 42 people across the eastern seaboard who will benefit.

This year, I knew 4 people who needed transfusions.

Somewhere out there, someone gave blood so that people I love could heal and recover. Knowing someone else in the world had given their blood selflessly motivated me even more. 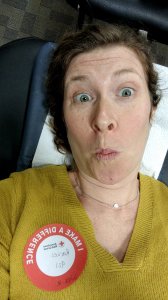 I am not failing at this one. I am winning. Big time winning.

So as we reset the calendar in the new year, I am resetting my thinking. I am giving myself credit and celebrating what I am able to do rather than punishing myself for what I did not quite finish.

On January 5th, I got back on the table and made my first blood donation of the year. Health permitting, I’ll be back in 56 days.

And we will go from there.

Sociologist mom writes for work and for pleasure.
View all posts by rglw →
This entry was posted in Uncategorized. Bookmark the permalink.