My husband bought me Mama, PhD as a graduation gift. He thought I would appreciate the stories about “motherhood and academic life.”  In under a week, I tore through the anthology.  Divided into four sections, the editors captured women’s stories about “The Conversation” whether to start a family, “That Mommy Thing” that competes with more scholarly pursuits, how “Recovering Academic[s]” fare after becoming parents, and the “Momifesto” that women create for themselves to guide their own professional and personal lives. 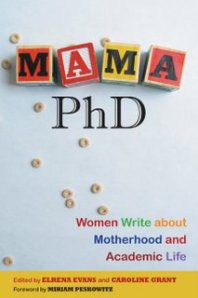 I felt comforted to read memoirs of women’s lives as they described their worry in revealing their pregnancy to their advisory committee, the schlepping and physical challenges of being pregnant on a big college campus, the swell of support or the lack thereof from different significant others in their lives, and the realization that life would never be the same after becoming a mother.  Each vignette was short, and I found myself devouring several at a time.  After I finished each one, I was inspired to write my own Mama, PhD essay–that’s in the works for some time next week when I finish it.

A few things about the anthology trouble me, though. Originally published in 2008 (though some essays have appeared elsewhere before publication here), the anthology documents women’s experiences in the academy in the 1970s, 1980s, 1990s, and 2000s, and the differences are nearly unrecognizable.  As children of academics in the 1970s or as expectant mothers in the 1990s and 2000s, the essayists describe their struggle to “balance” professional and personal lives at the expense of their relationships and employment opportunities.  To think that no progress has been made on family leave policies (not just maternity leave because parenthood does not simply involve mothers) is terribly disheartening.

My experiences negotiating maternity benefits in 2009 and 2011 sound remarkably like the experiences women shared over twenty years ago.  My own graduate institution’s simple statement on graduate student maternity leave is largely hidden from students, and if you discover it, there is no guarantee that your department will honor it. My first daughter was due during spring break, born early March, and I was lucky that my assistantship assignments for the semester were mostly flexible. I proctored a midterm three days before I was due, graded those exams while I was in labor, and three weeks postpartum juggled childcare to return to campus once a week for a seminar taught outside of my department. For my second daughter, however, due over the summer (a “perfect academic baby” many told me), the benefits did not apply because graduate students are not paid during the summer.  A few weeks after my second daughter was born, my office mate welcomed his first child and as a new dad, he received no consideration for leave to be there for his family.

Besides the lack of flexibility and support for growing families, I was also troubled by the extreme guilt and shame felt by so many of these soon-to-be and new mothers.  Essay after essay, women described their drive to be academic “superstars” and their disillusionment about the true demands of parenting very young children.  While I felt similar disillusionment when my oldest daughter was born, thinking I would be able to attend a conference several states away to present a paper ten days after she was born, I was never disillusioned about the importance of family life for myself and someday hoping for children of my own.  I married my husband two months before I started my graduate program, and we knew we wanted to start a family in the coming years.  I also knew that starting graduate school six years after receiving my bachelor’s degree meant that waiting until “after tenure” (and that’s if tenure ever even happened) was not an option.

As the disillusioned mothers professed their experiences, I was troubled to read about the traps other scholars set for academic parents.  Even if new mothers felt dedicated to their scholarly research, their advisory committees or their colleagues discounted their work, questioned their dedication, or simply “parent tracked” them.  Like these essayists, I worried about telling my advisory committee that I was expecting a second child when I was in the throes of putting together my first (failed) dissertation proposal.  I did not want them to give up on me or ignore me.  I was determined to finish my dissertation project because I could not walk away.

No birthing classes or first-aid lecture can prepare you for how hard those first few months of parenting will be as competing feelings of pride, fear, love, hope, and despair overwhelm your heart.  Your body fails you, your mind fails you, you fail your partner, and you feel really, really tired.  But you also discover inner strength and resolve, the dark days pass, and your expectations about everything change.  I do not question for one second the decision to become a mother when I did.  Unlike some of the essayists, I do not feel ambivalent, shameful or guilty about my decision to be a mother.  I know I may be perceived as less serious, but I feel no less serious about my research agenda.  I am still unsure of my next professional move, and even if it does not involve the tenure-track, I am still planning on using the skills I developed conducting and presenting my research.

You may be thinking that all of this is simply anecdotal evidence.  Sadly, new research confirms that women suffer a penalty for trying to have a family and an academic career. In their new book, Do Babies Matter?, Mary Ann Mason, Nicholas Wolfinger, and Marc Goulden describe the “baby penalty” that affects female scholars’ wages, their job security, and their engagement in the academic labor market at every phase of their careers.  A newer collection of essays out this month, Mothers in Academia, edited by Maria Castaneda and Kirsten Isgro, piles on similar frustration and disappointment about women’s work and life “balance” in academe.

I am not sure if I have been “parent tracked” but I do know that my family is important to me, and decisions about my or my husband’s professional lives will always take the well-being of our family and our marriage into account.  We would not choose to have jobs that forced us apart, we want to remain close to our extended family if we can, and we want our children to have both of us present in their everyday lives.  If that means that I make deliberate professional choices and pursue non-tenure-track or alternative-academic opportunities, I feel comfortable with that arrangement.

78 Responses to Reflections on Mama, PhD